WhatsApp has already “fooled” 75% of the population: it is the most used social network in Spain In an online meeting, The Social Media Family agency presented this Thursday the conclusions of the VIII edition of the Study on the use of social networks in Spain. This report observes the behavior of users of Facebook, Twitter, Instagram, LinkedIn, WhatsApp and TikTok in Spain, analyzing a series of sociodemographic factors, such as gender, marital status, age, educational level or city of origin.

Thus, the report reveals the profile of these users in the 50 largest cities in Spain with the aim of identifying trends based on the region and comparing urban and rural areas. The data collected comes from the information provided by users to the platforms themselves.

Pablo Sammarco, General Manager of the agency, explained that “the objective is to offer an overview” of Spanish users and discover how brands can take advantage of this information for their advertising campaigns.

Before breaking down the data by platform, Sammarco wanted to point out a key fact: 58.4% of the world’s population uses one of the existing social networks, which represents an increase of 820 million profiles compared to 2020. The most used in the world it is still Facebook, followed by YouTube (which is not considered in this study).

Users of the platforms in Spain

In our country, for the first time Instagram has surpassed Facebook in number of users. This last platform has dropped from 22 million users, returning to 2015 levels, while Instagram has grown to reach 24 million profiles in 2021.

For its part, Twitter has shown a growth of 100,000 users compared to 2020, thus stopping four years of stagnation and falls. That same upward trend can be seen in the fifty most populous cities, where growth has been somewhat higher (3.83%). LinkedIn has 15 million profiles in Spain, which represents an increase of 1 million compared to 2020.

To attend to the current situation of social media, this VIII edition of the report has also included data from WhatsApp and TikTok. The first is consolidated as the most used social network, with almost 36 million users: 75% of the population has a profile on this platform. The 50 most populated Spanish cities concentrate just over a third (37%) of the 47.32 million registered inhabitants.

According to the report, the followers of Zuckerberg’s social network are getting older: 50% of all users are between 40 and 64 years old. The group between 18 and 39 years old has lost 24 points in 7 years.

Women predominate over men. In addition, one in four profiles analyzed on Facebook indicate their marital status in their biography: those who do it the most are married women and the fewest, single women.

The most followed fanpages by Spaniards on Facebook are closely related to football: 7 of the 10 most followed pages refer to this sport. The case of Sergio Ramos stands out, whose page has increased his followers by 60% from 2021 to 2022.

The Social Media Family points out that, on Twitter, 18.59% of its community are active users (they have tweeted at least once in the last two months, a figure that falls by almost 8%).

Observing the 50 most populated cities in Spain, it can be stated that almost 53% of users are in them. Madrid is the city with the most verified profiles, followed by Barcelona and Valencia. Granada, Seville and Valencia are the cities with the highest penetration of Twitter per user in our country. 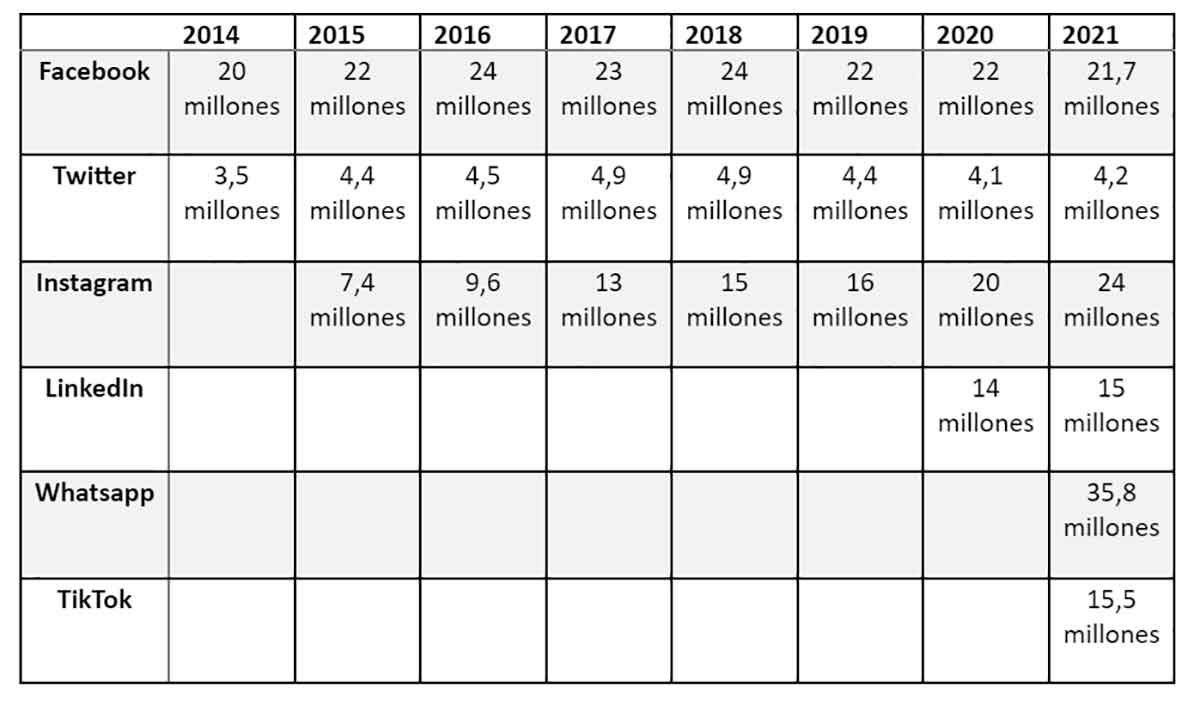 On Instagram it is one of the favorite social networks of the Spanish. It has reached 24 million profiles this year and its “robot” portrait is female (54.17%), 18 to 39 years old (64.17%) and married (5.42%). This is what the report prepared by The Social Media Family points out.

The “robot portrait” of the LinkedIn user in Spain would be a man, between 25 and 34 years old, with more than 11 years of experience and employed in a company with more than 10,000 workers located in Madrid or Barcelona.

For its part, the number of TikTok users over 18 in Spain is 15.5 million, although it could reach 19 with minors. In fact, it should be noted that 35% of the active profiles on this platform are over 35 years old.

The robot portrait of the tiktoker is predominantly female (59.29%), between 18 and 24 years old (41.44%). The predominant themes are the categories of “News and entertainment”, “Clothing and accessories” and “Beauty and personal care” (more than 80%).

More than 65% of users are between the ages of 18 and 35, making it one of the social networks with the highest presence of young people. Of these, more than 6 million users are between 18 and 24 years old. In addition, Madrid, with 11% of the total profiles of legal age, is the city with the largest community on TikTok. They are followed by Barcelona (7.69%) and Seville (2.71%).

It is the most used social network in Spain: 75% of the population uses it as a tool in their day to day. Even so, the predominant profile is that of women (51%), between 18 and 39 years old (52.79%). In practice, around 45% of all profiles are concentrated in the 50 most populous cities, whose segmentation remains practically identical to the percentages produced at the national level.