Mobile Gaming, a booming scenario with a great impact for brands There are 3 billion people active in this market, of which 20 million come from Spain.

If you can’t see the embedded video correctly, click here.

This data has been provided by Ishaq Platero, Adsmovil Europe Regional Manager, during the meeting organized by MarketingDirecto.com in the Pinesample space in Madrid under the name “#HablemosDeMobileGaming”. In addition, Platero has shared other curious data that provide a clearer scenario to the environment we are here to talk about:

35% of downloads in the App Stores are games
70% of revenue in app stores comes from mobile games
61% mobile game download growth was in 2021
93% of apps are freemium
Although it is true that the history of gaming has much more travel. Since the first Arcade and until today, video games have gone through different stages, although for the person in charge of Adsmovil there are three dates that stand out in Mobile Marketing:

2007, when Steve Jobs introduced the first Smartphone
2009, when Angry Birds was released, the first great success of a game worldwide with one billion downloads.
2011, when a game like Cundy Crush was able to generate 493 million dollars in 3 months, but in which only 3% of its audience paid to play.
To this we must add that the target audience that advertisers can target is very broad and, perhaps, even surprising. The most significant fact is that despite what we might think, more than 50% of mobile gamers are between 25 and 55 years old. Without counting on the gender division, because although it is perceived that the environment is mostly male, the reality indicates that there is a 50% male-female balance.

To conclude his presentation, Platero assures that there are 5 reasons to bet on Mobile Marketing:

Mobile Gaming: How to get the penetration of an expanding market? 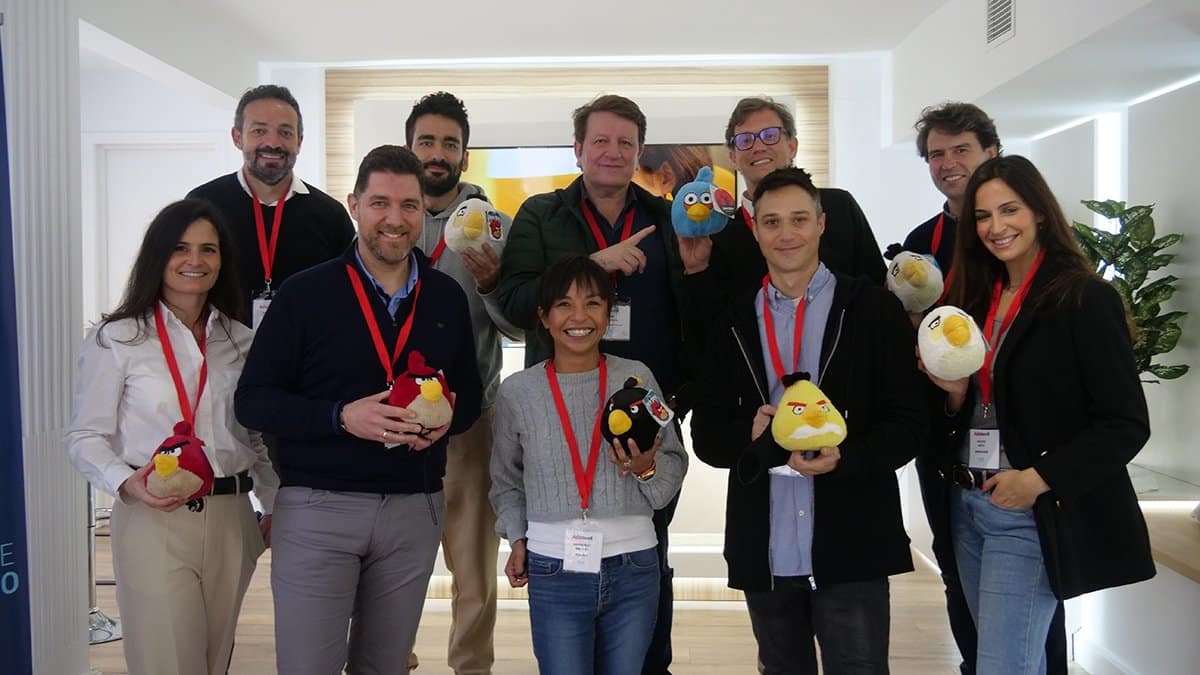 Platero’s presentation ended with a question that welcomed the moderated round table with Javier Piedrahita, CEO & Founder of MarketingDirecto.com: What must be done so that 2022 is the year of reality in which the penetration of Mobile Gaming has weight in the media and communication plans? Also participating here were Juan Antonio Díaz, Business Director of Initiative; Nuno Alves, Client Service Director of WINK TTD; Ángela Reyes, Global Programmatic Manager at Meliá Hotels International; Óscar Rodríguez, Managing Director at Xaxis Spain & GroupM Programmatic Services Director; Montserrat Sánchez, Programmatic Connection Manager at Publicis Groupe; and Leandro Romero, Global Director Digital Sales & Marketing at Mindshare.

The first to contribute her opinion to the debate was Sánchez, who presented her perspective in which she explained: «The audience has grown and now young people and adults play together. For many clients it has been an opportunity to grow and take opportunities to attract new advertisers and investors. For their part, from Xaxis they explain that those born in the 70s were the first generations to start playing: «The game spreads because parents, children and grandparents cover the full range of audience«.

For his part, Platero has shared that this senior target of people over 55 years of age is the one that best explains the paradigm shift that mobile gaming has brought, because even if they have never played regular video games. Now they dedicate themselves to doing hobbies or playing Parcheesi as a family from their mobiles or tablets thanks to the use of technology. And this reality, from Meliá they call it entertainment instead of mobile gaming.

Alves has also shared with those present his opinion on the matter: «Many times games are associated with children isolated in their room, when the reality is that many times, they are playing and interacting with their friends, regardless of where they are». In addition, he has insisted that mobile gaming is not just child’s play. To which Romero adds: «The mobile comes to democratize the game«. In fact, with the metaverse a new debate has been opened in the gaming world, since video games have been with this dynamic in the industry for years. In fact, Romero explains: “In the end it is your avatar, something personalized and the experience reflects the great change that the industry has begun to have.”

From Publicis they call on the audiences to take them into account also in this virtual reality: «They are generations that have another way of thinking. We have to be clear about the message and the strategy when it comes to impacting them«. And from Adsmovil they assure that this experience is still to be built.

The second part of the round table began with Platero, who explained the reality of the adoption of mobile gaming as an advertising platform: «The feeling is that the environment has plenty of points of sale but many advertisers do not yet perceive it as a channel from which to access their audiences.

Reyes, for his part, explains that the user is very normalized with these platforms and tools: «It is true that not all advertisers have the same maturity, in the end these processes take time. But we must ensure that we are on all channels, especially taking into account the immediate future without cookies. To which he adds the approach of two options: «As advertisers we can stay in the area where we lose control or bet on an environment that offers us premium formats without saturating the user».

In this context, from Mindshare they have also commented that «advertisers have the opportunity to offer an extra to users so that they can continue playing without having to pay«. And Publicis’s response focuses on the experience that accompanies the user, since it is a moment in which he is relaxed and therefore, advertising, far from being in the way, adds value.

The conversation continues with the Adsmovil expert: «Television is more off than ever and the dual-screen concept already seems obsolete«. Meanwhile, from Xaxis they point to the basic premise that advertising has to be where the audience is: «Today’s consumers are digital and begin to read other media. El País or Los 40 Principales are no longer the main means of being informed».

And if we return to the main topic (video games) we have to point out that even large platforms such as HBO or Netflix have launched their project in this gaming environment. In fact, from Mindshare they assure that it is a way they have to monetize and expand that audience: «Netflix is ​​more afraid of Fornite than HBO«. And it is not the only change, because the viewer has also undergone an evolution to be an active part of the strategy, as has happened with brands like Gucci, which allow the creation of sensory experiences with the brand, or Louis Vuitton, which sponsors the finals of League of Legends.

Although we must not forget the passive audience, which is dedicated to seeing how others play. And if we focus more on eSports, it should be noted that the 50-50 in the gaming world becomes 80-20 with a majority of men. From Adsmovil they explain: «If you are targeting general audiences, it is mobile gaming. If as a brand you want to have a specific ‘gamer’ discourse, then you have to adapt to the specific characteristics of that narrow part of the funnel. And that is something that not all brands can or want to do.

In addition, from Xaxis they remember that brands can decide in which game to appear and ignore those that provoke the most explicit violence. Something that Platero reinforces: «We asked that, by default, snipers be excluded«. And from Publicis they add: «Control the environment and know how to adapt. In the end, there is a very interesting audience for brands here.”

In fact, according to Platero, the games with the largest audience are the most casual: «Angry Birds, for example, allows us to approach the concept of Premium in mobile gaming and this is, basically, formats of great notoriety broadcast in top download titles in the app stores and with an average user rating above 4.5 stars».

Advertisers are in the gaming environment for different reasons, either because they find their audiences, to take advantage of the notoriety of the formats or because they more easily achieve the KPI they are looking for. The good thing about this channel is that it allows you to provide solutions that fit what brands are really looking for.

The round table ended with a conclusion provided by each of the speakers, who have contextualized the Mobile Gaming environment:

Montserrat Sánchez (Publicis Groupe): «It is time for brands, advertisers and agencies to find that value in the audience. It is something that we have been dragging through the rest of the media. You have to be part of that environment.”
Ángela Reyes (Melia Hotels): “The opportunity to offer highly adapted and personalized unique experiences in a relaxed environment.”
Óscar Rodríguez (Xaxis): «We must continue learning from innovation».
Nuno Alves (Wink): «Brands have the challenge and obligation of being in the entertainment industry. Gaming is where the audiences are and it’s bigger than movies or music.”
Leandro Romero (Mindshare): «I ask for patience. Everything is going to arrive and if the audience is there, the brand will be.
Juan Antonio Díaz (Inititative): «It is difficult to find other points of contact with the consumer and gaming gives us a great opportunity».
Ishaq Platero (Adsmovil): «2022 has to be the year of acceleration».